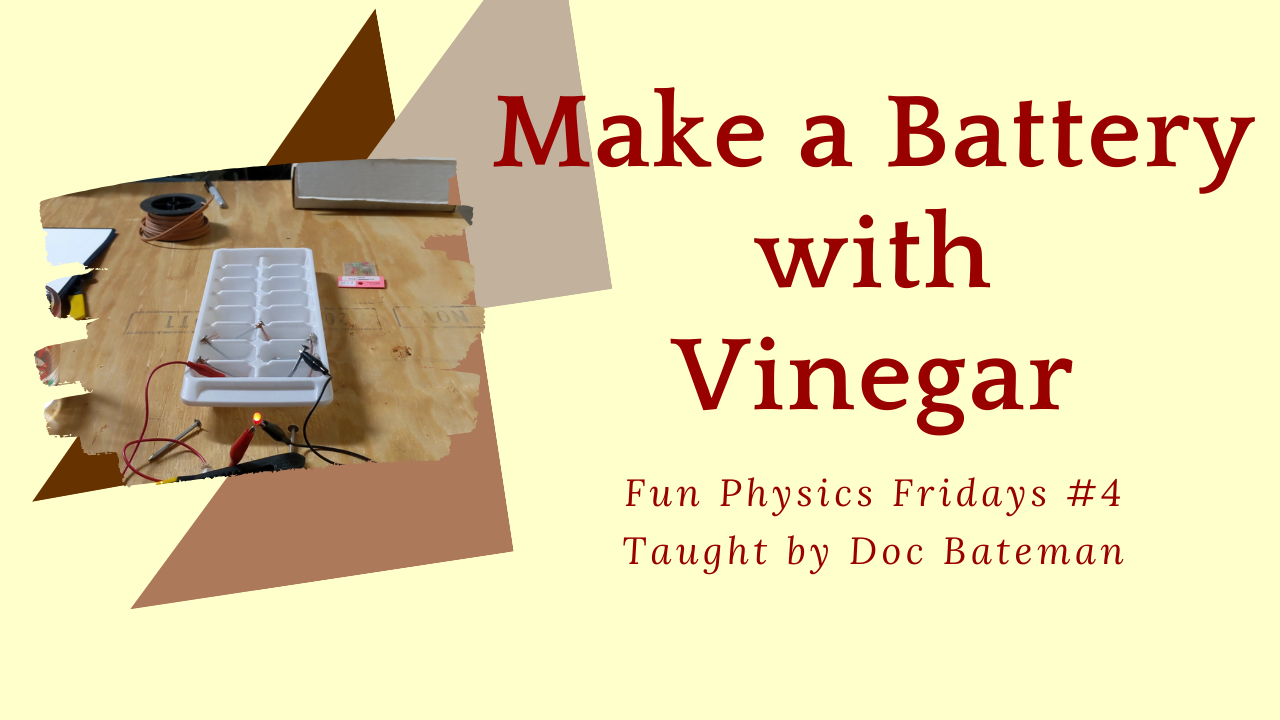 Did you know that you could make a battery with vinegar in an ice tray? Let me show you how!

Hey there, Doc Bateman here. Did you know that you could make a simple battery in an ice cube tray that will light an LED? Let me show you how!

LED means light emitting diode. Why is this important? Because a diode is a one-way valve, so it will only work when it’s wired the right way. I’ll explain that in just a minute. Our battery is going to be made with vinegar and two different metals: zinc and copper. Zinc we can find on nails and the copper is copper wire. Because we’re trying to connect to a liquid, surface area is important, so using stranded wire is helpful. I’ll use wire that’s like an old extension cord. Strip off 2 to 3in then twist one end tightly to keep the strands together. We’ll need six of these and we’ll need 6 nails. Wrap the twisted end of the wire around the head and of 5 nails. Leave one nail and one wire separate.

Since the LED has plus and minus sides, we need to know which is the + and which is the – side of the battery. I’ll use a voltmeter to find out. You won’t need a meter because I’ll show you the answer. Since we don’t know the answer, we’ll have to guess. Hook up a nail on the negative or the black wire and the copper wire on the positive or red wire. The meter’s telling us we can get about 1 volt from the battery and there’s no negative sign on the meter, so we guessed right. Zinc is negative and copper is positive. We’re going to need about six cells to light the LED so each cell needs one of each: one wire and one nail. Don’t let them touch and then lay them out so we have six connected in a row. Here’s a picture of eight cells connected together, but it turns out that 6 works just fine. Use your last nail and your last copper wire to connect to the output wires.

Next we need to get the LED hooked up the right way. How do we know? The symbol for the diode is an arrow that points at a vertical line. If you don’t have a symbol you have an LED that’s not hooked up to anything, the shorter leg is the negative side or the vertical line which also means that the longer leg is the positive side or the arrow on the diagram. So just remember, since we’re hooking to a liquid, surface area is important. Get as much of the nail in the vinegar as possible and use stranded wire if you can – it has more surface area. Don’t let the wire from one cell touch the nail in the next cell. The LED has to be connected the right way: the shorter leg is negative the longer leg is positive or if you have a symbol the arrow is positive in the vertical line is negative. I was able to get mine to work by setting it all up and then pouring in the vinegar. Mine stayed lit for about 10 minutes.

Question:  How do you think this battery is working? Leave your answer for me in the comments below.

This is a fun & easy project to do. Let me know how yours worked and send me a picture!