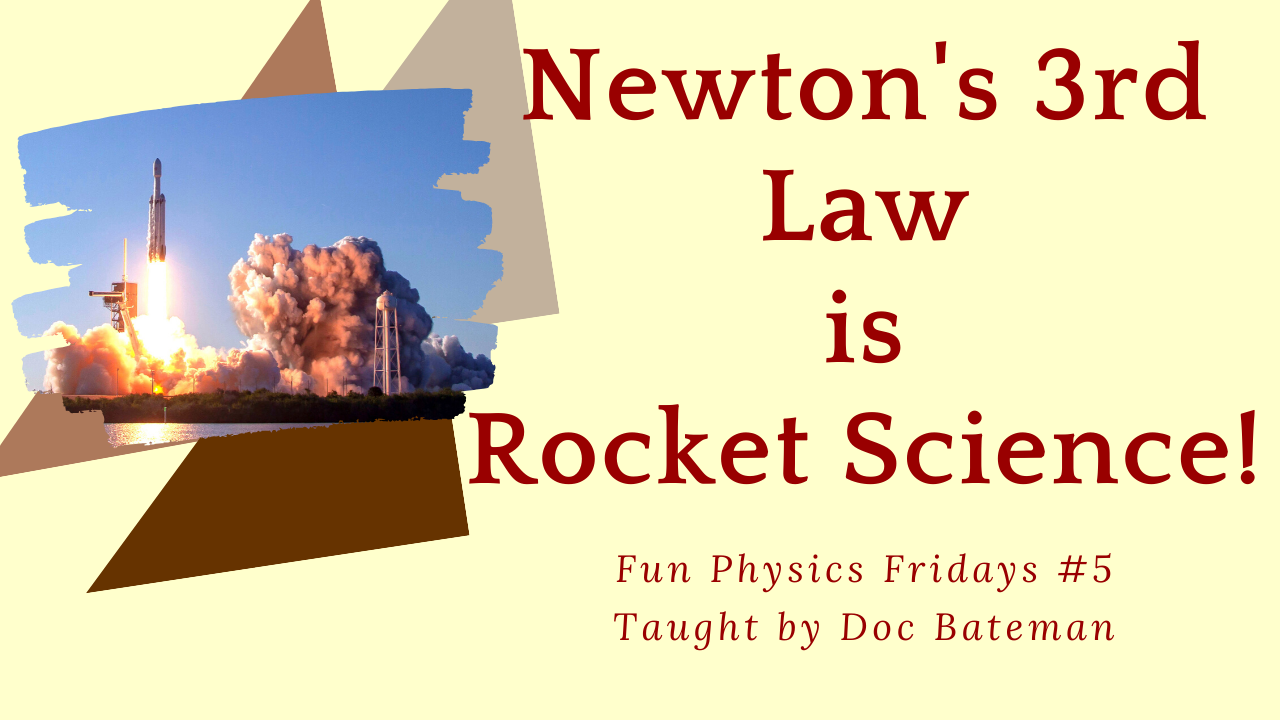 Hey there, Doc Bateman here. In this video, we’ll learn that Newton’s third law is rocket science! How do rockets work? Hang on, we’ll see! First, help me out by hitting the like and subscribe buttons below. That helps more people to find my videos. Look in the description below for a link to my website, where you can get a worksheet that goes with this video. Let’s get started.

Newton’s third law says for every action there is an equal and opposite reaction. How does a rocket work? By burning some kind of fuel and expelling the hot, rapidly expanding gases out of its nozzle. When we burn anything, we are oxidizing it. That’s a chemical change caused by combining the fuel with oxygen, and this creates heat. For liquid fueled rocket engines, rocket designers want to “supercharge” this process, so they add a chemical called an oxidizer. It makes the oxidation happen much faster and much more thoroughly. When exhaust gases are ejected out of the nozzle from a rocket engine, this causes the rocket itself to move in the opposite direction. In physics, we have something called the rocket equation. This accounts for the fact that at the beginning, when time is at t=0, the rocket has maximum mass, zero velocity, and maximum gravity. As the rocket leaves the launch pad, (1) gravity decreases as one over r squared (or one over the distance from the Earth squared), (2) mass decreases, because propellant is being burned, and (3) velocity increases by acceleration. The rocket equation is called a differential equation because it has to account for three things that are changing at different rates. Just so you know, in college, differential equations is the class you take after calculus, so we won’t say anymore about that right now.

Remember that forces have a direction. Here’s a picture of a model rocket motor. It’s a small, solid fuel rocket motor with a nozzle made from ceramic. This nozzle is fixed, so the force from the exhaust is in a fixed direction. To steer this kind of rocket we need fins. As rocket technology advanced, the fins became movable so the rocket could steer itself, based on sensor input. Today’s rockets don’t have fins; they use a steerable nozzle. In order for this to work, they need lots of sensors (for position and direction), a fast computer, and a nozzle that can move (or gimbal).

In July of 2019, for the 50th anniversary of the Apollo 11 launch, the US Space and Rocket Center set the Guinness’ world record for the most model rockets simultaneously launched (4,923). I have a link to a news video about it in the description below. Liquid field rockets give us the ability to control and even stop the burn. Solid fuel rockets are simpler and more powerful, but once they’re lit they burn until they’re finished. Rockets accelerate as a reaction to the exhaust. The exhaust goes one way and the rocket goes the other way. Where else do we find this in physics?

Boat propellers push water away from the boat, causing the boat to move forward. There are also personal water jet craft that bring water in, pressurize it, and then expel it out backwards through a steerable nozzle. It’s a type of water rocket.

In a vehicle, car tires push backwards on the pavement causing the vehicle to move forward.

Any sport that has a ricochet is governed by Newton’s third law. That might be pool, curling, marbles, and so on.

A runner’s shoes push backwards against the ground, which causes them to be propelled forward.

And finally, here is a pole vaulter launching himself over a crossbar. Here’s a question: how does Newton’s third law work for the pole vaulter?

Leave your answer for me in the comments below. Be sure to get your free worksheet from my website; see the link below. Also please help me out by hitting like and subscribe. Thanks for watching.