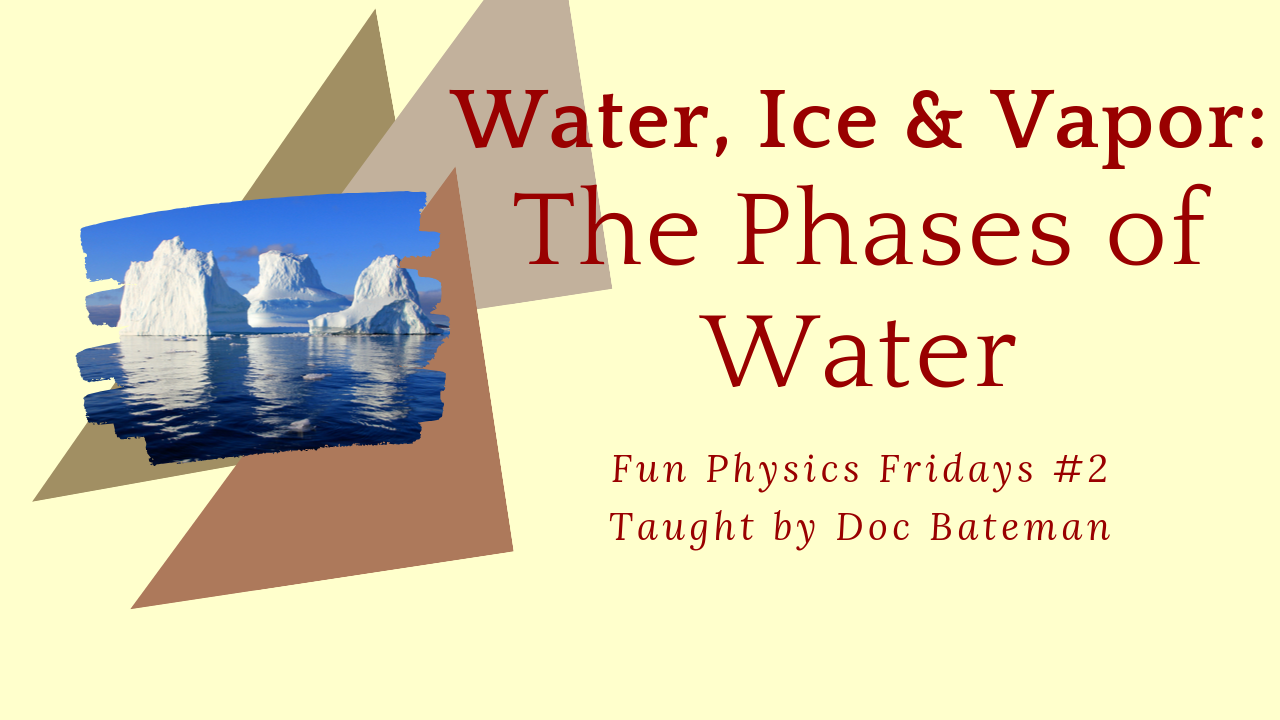 In this short video, I talk about the phases of water, phase transitions, and talk about just what an amazing substance water is!

Hey there, Doc Bateman here. Welcome to my new series of short physics videos. Today we’re going to talk about ice and water, and what an amazing substance water is. What!? Water? Really??? Yeah, no kidding!! Water is amazing stuff and when I get done I think you’ll agree. You can help me out by hitting the like and subscribe button below and don’t forget to get your free worksheet after you watch this video. Let’s get started.

You might think that water is a very plain substance because it is so common. I want to tell you that water is an extremely unusual substance in how it behaves. Water exists in all three phases in everyday life. The liquid phase we call water, the solid phase we call ice, and the gaseous phase we call water vapor. We can think of these as existing in a triangle. There are words for these phase changes. Some are familiar; others you may have never heard. The transition from liquid water to solid ice is called freezing. The opposite, from solid to liquid, is called melting. The transition from liquid water to gaseous water vapor is called evaporation. Reversing that transition from water vapor to liquid water is called condensing. There is a way to go directly from solid ice to gaseous water vapor: this is called sublimation. You can see it happen if you look at old ice cubes in your freezer. The temperature has never gotten above freezing in your freezer, so the ice does not melt. It shrinks by a process called sublimation. And to complete the triangle, it is possible to go directly from vapor to solid: This is called vapor deposition. This is how frost forms inside sealed packages in your freezer. Some people call this freezer burn.

The part of physics that deals with heat creation and transport is called thermodynamics or just thermo for short. We have to add energy in the form of heat to go from solid to liquid to gas. Water gives up heat energy when it goes from gas to liquid to solid.

What’s another unusual thing about water? Most substances expand as they get hot and contract as they get colder. Water contracts as it gets colder, right down to almost to freezing point. This happens because the molecules slow down and pack in closer to each other. As the temperature gets colder, and we reach the freezing point, the molecules start to form ice crystals. The molecules snap into the lattice of the crystal and actually spread apart. This causes ice to expand is it freezes. You’ve seen this if you’ve ever frozen a canned or bottled drink. Remember that density is mass divided by volume. So in freezing, the mass of the water doesn’t change, but it takes up more volume, which makes ice less dense than water. That’s why ice floats in water.

What would happen if ice didn’t float in water? Then in lakes and other bodies of water, ice would freeze and sink to the bottom. This would continue until the whole lake was frozen solid and the animals would die. Since ice floats, only the top layer freezes and the rest remains liquid. I told you water was amazing stuff!

Also, water has a very high heat capacity. What does that mean? It means it takes a lot of energy to raise the temperature of water by one degree. This is why it takes a long time to boil water and it means that water can store lots of heat energy. Also, we have to add a good bit of energy to get water to change phases in the heating direction, and it gives up a lot of energy when it changes phase in the cooling direction.

What else do we know about water? There are billions of ways for ice crystals to grow, which is why snowflakes all seem unique.

Question: Why do snowflakes form as hexagons or 6-pointed stars? Leave your answer for me in the comments below.

I hope you agree by now that water is an amazing substance! It has some very strange properties, and I bet you didn’t know all of them before you watched this video. Leave an answer to my question – tell me what you think – in the comments below. Hit like and subscribe; it’ll help me out as well. Don’t forget to get your free worksheet from my website linked below as well. Thanks for watching.