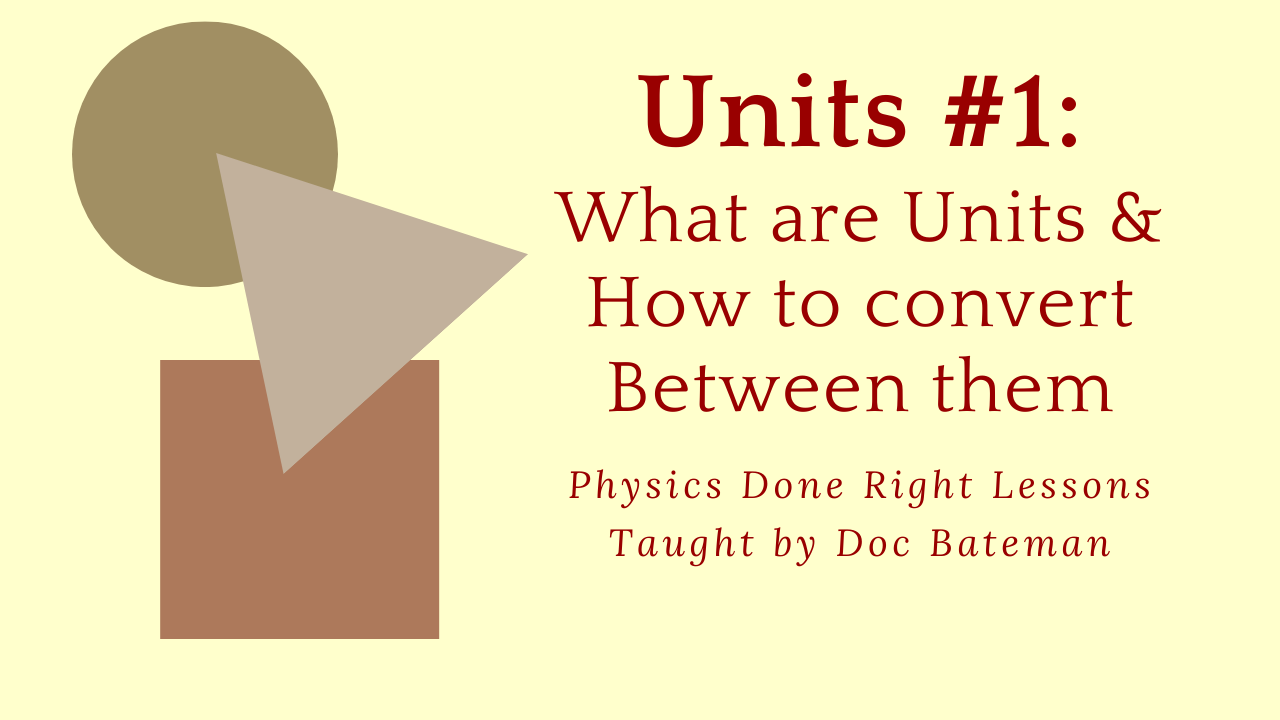 First lesson about units: What are units, how they can help, and how to convert between unit systems. Be sure to get your free worksheet that goes with this video.

Here’s my Physics Done Right lesson about units. Learning about units is a great place to start learning about physics. In this lesson, I’ll tell you why we need to learn about units, how they can help you, and most importantly, how to calculate unit conversions. I’ll show you my method for doing a unit conversion and we’ll work several examples. Let’s get started.

Welcome to the Physics Done Right lesson on units. Why do we look at units? What are units and how can they help me? Units turn a number into a measurement. For example, let’s say I had a measurement of 10 meters. The number tells how much and the unit tells of what. Let’s say we also had a measurement of 6 seconds. Again, the number tells how much and the unit tells of what. There are many different unit systems. We’re only going to use two in physics. We need to be able to convert from one system to another and I’ll show you how to do that. Furthermore, units help you to get your calculation right, so it’s important to pay attention to the units in every calculation. We’ll also talk about scaling and prefixes – that’s how to make units bigger and smaller. And we’ll also talk about proper notation, how do you write it down. And I’ll explain to you the method so that you’ll know how to write things down and you’ll always get it right.

There are seven basic units, but for now all we need are: length, mass, and time. All other units are derived from these basic units. The main unit system we’ll use for physics is called the MKS system, also known as the metric system. That stands for meter, kilogram, and second, which is the base units for length, mass, and time in that system. Sometimes it’s also called the SI system, which is an abbreviation from the French term that means “International System of Units.” There’s another system called the cgs system that was used for physics a long time ago. It’s similar, but it has smaller base units; it stands for centimeters, grams, and seconds and it’s also called Gaussian units. I only mention it here in case you run across it – we won’t be using it. And thirdly is the imperial British system. It’s what the US uses – feet, pounds, etc. It’s difficult to use for physics, so we won’t be using it very much for calculations, but we do need to be able to translate in and out of that system, because of what you encounter in your daily life.

For our first example, let’s convert 10 ft to meters. What follows is the method that I use to do unit conversions. It makes converting units easy and automatic, and you don’t have to think about whether the multiply or divide. So to make this conversion, the first thing we need to look up in a conversion table and we find that 1 meter equals 3.28 ft. Since these two things are equal, if I write a fraction that has one of those terms over the other term, that means I’ve written one (1). If I divide something by itself I get 1 and I can always multiply or divide by one and not affect anything. We’ll draw a bracket and I’ll give you an example of how my units conversion method works. So here’s a bracket. Take what we start with: 10 ft. Write that in the bracket, and now the conversion factor. I want to cancel feet because I’m converting to meters, so to cancel the feet, that means I need to put feet in the denominator. Here’s what I have: 3.28 ft and 1 m so that’s multiplying by one, which is legal. Here’s the cancellation: feet cancel, so what I have left is meters, which is good because that’s what I want. Next I collect numbers. I have 10 in the numerator and 3.28 in the denominator and the only unit I have left is what I wanted: meters. Now I grab a calculator and I type this fraction in and I find out that it equals 3.05 m.

Next let’s convert 1 mile to meters. This will be a two-step conversion. First, I know that one mile equals 5,280 ft and then the conversion we’ve been using 1 m equals 3.28 ft. Now what I need to know is how to combine all this to do my conversion. I’m starting with 1 mile. Draw the bracket with one mile, and now I need a mile in the denominator to cancel that mile. So I use the first conversion factor: 1 mile = 5280 ft. Then I can use the second conversion factor and put feet in the denominator: 3.28 ft = 1m. Let’s see how we did. Miles cancel, feet cancel, and I’m left with one unit: meters,  which is what I wanted. Now collect the numbers: 5,280 over 3.28 and it’s in meters; that’s my unit that I have left, and it turns out that this equals 1609.8 m.

Next let’s convert 60 km/h into feet per second. This is a velocity or a compound unit. Draw the bracket with 60 km per hour as my starting unit. I need to convert kilometers to meters so I need kilometers in the denominator; 1 km = 1,000 m. Next I need feet per second, so again 1 m = 3.28 ft. I’ve got the feet part that I need. let’s cancel and see where we are. kilometers cancel kilometers, meters cancel meters, so I’m left with feet. That’s good but it’s feet per hour. Now I need to do the time conversion. I need an hour in the numerator to cancel the one in the denominator. I know that 1 hour = 60 minutes and I also know that 1 minute = 60 seconds. Now cancel the time units: hours cancels with hours, minutes cancels with minutes, and what I have left is in the numerator feet, denominator seconds, which is feet per second and that’s what I want. Next collect numbers 60 x 1,000 x 3.28. I can ignore the ones. This is over 60 x 60 and the units we have left are feet per second. If I grab my calculator and I calculate that fraction, I find out that it equals 54.67 ft per second.

I hope you know a little more about units now. How to use units and how to do conversions. In part 2, I’ll do a few more examples and I’ll talk about how to make units bigger and smaller. Don’t forget to hit like and subscribe below and leave me a comment. If you think these videos are helpful, please share them with a friend. Thanks for watching!