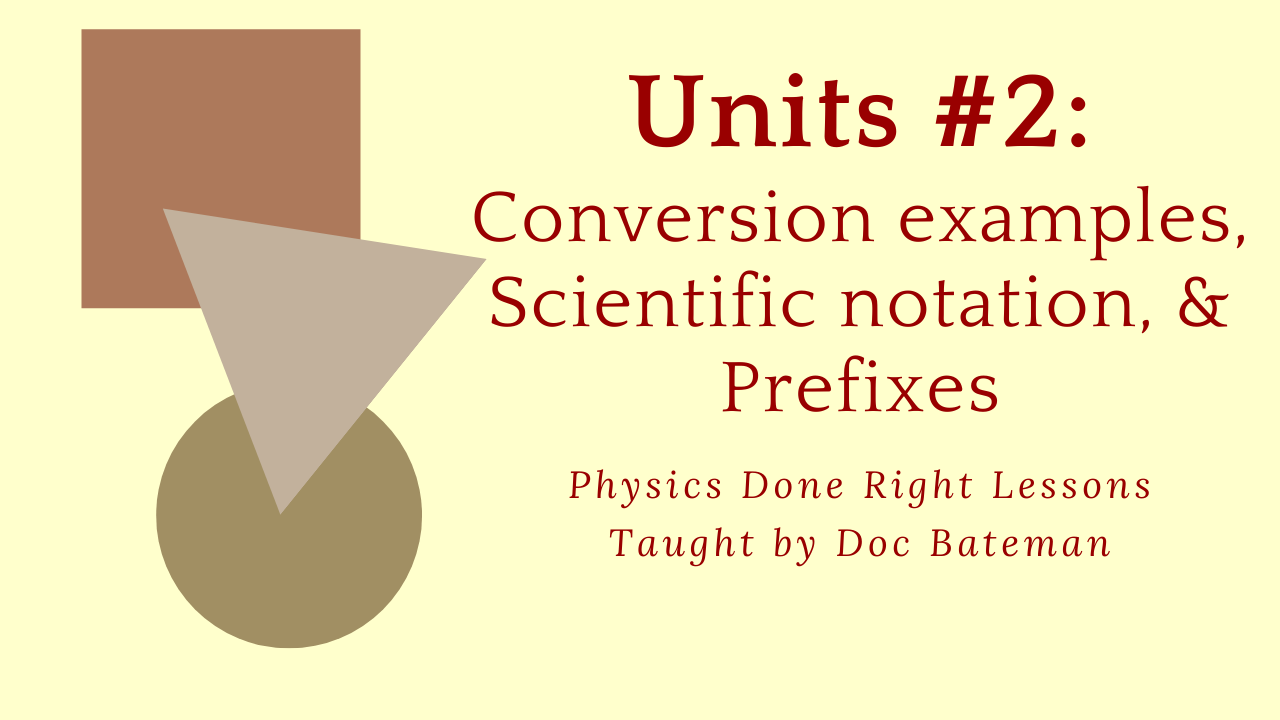 The conclusion of my lesson on units: More conversion examples, proper notation for units, scientific notation and prefixes. Be sure to get your free worksheet that goes with this video:

Hey there, Doc Bateman here. This is part 2 of my Physics Done Right lesson about units. If you haven’t seen part 1, please go watch it first. In this video, I’ll do some more examples and then talk about scientific notation, the proper way to write units, and how prefixes work and how to write them. Please click like and subscribe below and also leave me a comment. If you think these videos are helpful, please share them with a friend. Let’s get started.

Next, let’s do a time conversion. How many seconds are in January? Draw a bracket with January. I need that to cancel, so I put January in the denominator and I know that January equals 31 days. Now let’s work our way down to seconds. We need a day in the bottom to cancel: one day = 24 hours, 1 hour = 60 minutes and 1 minute = 60 seconds. Let’s check the cancels. January cancels, days cancel, hours cancel and minutes cancel. What I have left is this single unit of seconds, which is good because that’s what I want. Now collect numbers: 31 x 24 x 60 x 60 and the unit I had left was seconds. This equals a very large number: 2 678 400 seconds.

For our final conversion example, I wanted to show you how to do a volume conversion. In this question, a concrete truck holds 10 yards. “Yards” is a jargon term that means cubic yards. So I have

10 cubic yards of concrete. How much is that in cubic meters? I need one conversion factor and that is 1 m = 1.094 yards. Draw a bracket with 10 yards cubed. So I need yards in the denominator. I use my conversion factor but I’m not done. I have one yard in the denominator, but I’ve got three (units of) yards in the numerator, so I have to do the same conversion three times to cancel all three of those yards. So let’s do it again, and a third time. Now let’s check the cancels: 3 yards cancels 3 yards, so I have left a meter, and another meter, and another meter, so that’s meters cubed, which is good because that’s what I want. Now gather the numbers 10 over I’m going to shorthand this 1.094 cubed and the units I have left are meters cubed. A calculator tells me that this equals 7.64 cubic meters.

Let’s talk about notation. When you write quantities with units there’s a convention. Convention means a standard practice. And this convention says: if the unit is based on a person’s name then you capitalize the abbreviation. But if you need to write out the full word for the unit, don’t capitalize it, because that would confuse people whether you’re talking about the unit or the person. Let’s give some examples. The unit of force is called the newton, after Sir Isaac Newton. So if you write the full name you don’t capitalize it, but if you abbreviate it, the abbreviation is a capital N. The same for the joule, the watt, the amp, the volt – there are many units that are named after physicists and other scientists and engineers. So that’s the convention: capitalize the abbreviation but not the complete word.

Next let’s talk about scientific notation. Scientific notation is a way to write very large or very small numbers in a compact way and to keep track of where the decimal point is. So here’s the recipe: if you move the decimal point left then you multiply by 10 to the positive (whatever the count is) if you move the decimal point right, then you multiply by 10 to the minus (whatever the count is). For example, here I have 100 000 000. I want to move the decimal point here right after the one so if I move it I’d have to move it 7 places left since I moved left that means I have 107 giving 1.0 x 107. Then I have this very small number (0.00001). I want the decimal point to be right after the one. That means I have to move this decimal point 5 places to the right which means I have 1.0 x 10-5 and just for fun and a really good illustration, there’s a nice video that was made in the late ’70s called Powers of Ten and it nicely illustrates the very large and the very small. It’s on YouTube and I’ll put a link below so you can go watch it. It’s not very long and it’s very illustrative of powers of 10.

The table next lists the standard prefixes. Notice that they mostly step up or down by a factor of 1,000 which is 103. Here’s the table of prefixes. Notice that right here in the middle is 100 or 1. The prefixes that make units bigger go up from there: deca, hecto, and kilo. Notice that they are lower case like I mentioned: kilo is 1,000, mega is a million, giga is a billion, tera is a trillion, and so on. Then the prefixes that make units smaller go down from there: deci, centi, milli. You’ve heard of centimeter that’s a 1/100, milli that’s 1/1000. Here’s a strange one: this is micro and it’s represented by a lowercase Greek letter μ (“moo”) and it means one-one millionth; nano is one-one-billionth, etc. on down.

So there you have it. I hope you know a little more about units now, how to do conversions, and what prefixes are. Please click like and subscribe below and leave me a comment. If you think these videos are helpful, please share them with a friend. Thanks for watching.