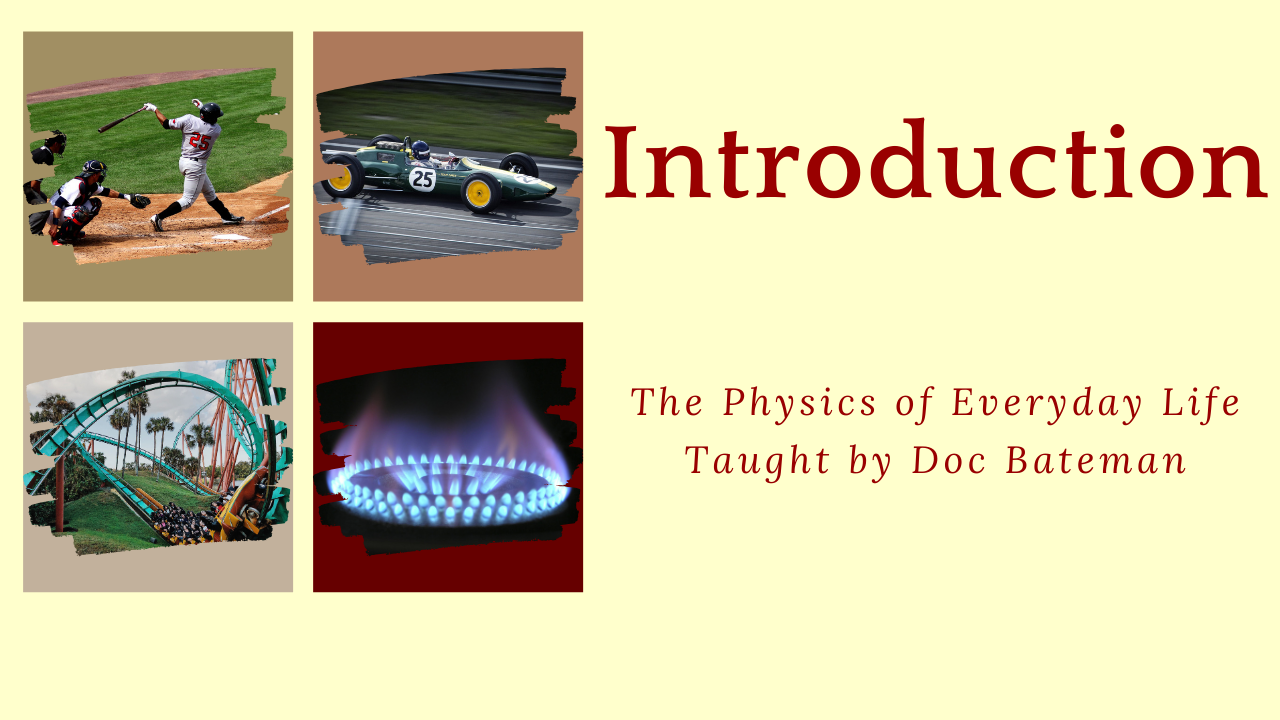 Here is the introductory video to the Physics of Everyday Life series. In this video I list 10 future topics and talk about the Physics of each topic. Be sure to get your free worksheet!

Hey there, Doc Bateman here.  Are you curious about Physics? Would you like to learn more about physics, but you’re afraid of it? You don’t know where to begin? This series is for you! I call it The Physics of Everyday Life. I’ll deal with many common topics and explain the physics behind everyday things.

I’m a physicist, but more importantly, I’m a physics teacher.  Physicists tend to look at the world differently. I’ll use everyday things that you’re familiar with and use those as a basis to teach you more about physics. We’ll talk about the physics of things you may encounter in your everyday life. What does that mean? Physics includes things like: motion, heat, waves, electricity, magnetism, electronic circuits, optics, … well you get the idea. I have an ever growing list of physics topics that I’ll make videos from. If you have a favorite topic, let me know and I’ll add it to my list. What follows is a quick overview of 10 topics from my list.

We start with gravity. Gravity is a pulling force between two masses. Typically between you and the Earth. Everyone knows what gravity is – or do you? Typically in physics we assume that the acceleration of gravity is a constant, but is it really? Gravity is so familiar that you may take it for granted. But just so you don’t get complacent, in physics we have a saying: gravity always wins. What about in the atmosphere? Everything that falls in the Earth’s atmosphere experiences air drag. The object accelerates until the drag force is balanced by the force of gravity. At that point, the object falls at a constant velocity that we call terminal velocity. What about gravity in space? Planets, asteroids, moons, meteors – we’ll go into more depth on just what gravity is, and what it does.

Much can be said about oscillations and waves – enough to fill a whole semester! Waves can transmit energy without moving mass. What does that mean? You can shake a string up and down while moving energy left to right. Waves can travel to the end of a string, reflect back, and add to oncoming waves. If you shake it at the right frequency, they all mix together and create standing waves.

There’s lots of physics in sound and music. When a long string is plucked, it sounds a low note, while a shorter string gives a higher pitch. In fact, string players such as guitarists or violinists shorten the strings with their fingers by pinching on the strings to make the pitch go higher. So higher frequencies correspond to shorter wavelengths. For a stringed instrument, there are two ways to change the pitch. Changing the length of a string or changing the tension of a string. If you blow across the open end of a long pipe, you can get a low tone and a shorter pipe will give a higher tone. This is how wind instruments and pipe organs work. Drums however use tension to change their pitch. A timpani drum with a loosely stretched head produces a low pitch; if you want to raise the pitch, a foot pedal on the drum tightens the head.

Now we’re going to talk about everybody’s favorite physics topic: amusement park rides! Have you ever ridden a ride and felt thrown to one side or the other while the ride goes around the corner or spins in a circle? This acceleration you feel is your body trying to keep going in the direction it started, as the car moves toward the center of the circle. This seems counterintuitive, as you feel a force in the opposite direction of the acceleration. We enjoy roller coasters because they can twist you around in three different directions. Airplanes call it roll, pitch, and yaw, or rotation about each of the x, y, and z axes. You feel really out of control when the roller coaster is spinning you about two of these axes at once. It’s not something most people feel in everyday life, which makes it a very unfamiliar sensation, which is always more impressive.

Next up is inertia. Newton’s first law says that an object at rest will stay at rest and an object in motion will stay in motion, moving in the same direction, unless a force is applied. You have to apply a force to get an object to turn, speed up, slow down, stop, or start. Analyzing the forces and acceleration of objects is a part of physics we call Mechanics, which also fills a whole semester. It’s one of the more important parts of physics if you want to become an engineer or a designer.

Our next topic is friction. Friction is a force that always opposes motion. It exists in two kinds: static and kinetic. Static friction must be overcome to get an object to move, and once moving, kinetic friction must be overcome to keep it in motion. When you calculate friction, the force of friction depends on what we call the normal force, which is the force into the surface that the item is resting on. Then the direction of the frictional force is always such that it opposes motion. So we first have to know which direction the object moves in order to properly insert the force of friction. Friction has many uses in daily life from the tread on your shoes, to the brake pads on your car to the tread on your car tires.

Fluid mechanics is yet another branch of physics. It studies the buoyant force that keeps a boat afloat, the flow of a fluid through a pipe, pressure needed to pump fluid through a particular length of pipe, and water pressure versus depth in a pool of water. Fluids can also do work through something called hydraulics. This is where pressure is put on a small piston that gradually raises a larger piston. This is used in car jacks, elevators, brakes, and many different aircraft systems.

Heat is an energy when applied to an object or system causes its temperature to rise. And vice versa, if heat is given up by the object or system, then it’s temperature decreases. The study of heat being produced, transported, and stored is called thermodynamics or “thermo” for short. Thermo is a branch of physics that lets us calculate many things about heat generation and transportation. Thermo is very important in calculating how to get heat out of your computer system, or heat from your car’s engine, or moving heat in and out of your house to heat and cool it. Heat cannot do work directly but it can do so with machines through pistons and turbines. Machines can move heat from one place to another; we call these refrigerators and heat pumps.

Our next topic is magnets. Magnets always have two poles: North and South. They don’t exist by themselves. If you break a bar magnet in half, each piece will still have two poles. The attraction force between two opposite poles or the opposing force between two of the same pole is called the magnetic field. We’ll talk more about fields in future videos. Did you know that the Earth is a magnet? One important thing it does is to help us find directions using a compass. A magnetic compass is a small, floating, magnetized needle that aligns itself with the Earth’s magnetic field and points toward magnetic North. This allows you to figure out which direction you want to go. The Earth’s magnetic field also helps protect us from cosmic rays and particles by causing them to move around the Earth and not impact it. Magnetism and electricity are related as we’ll see. One way is through the electromagnet. This is a coil wrapped around a piece of iron that becomes magnetized when an electric current is passed through the wire. Electromagnets have many uses wherever you need a magnet that can be switched on and off.

Our final topic is electricity. Electric charge also comes in pairs: positive and negative. But, electric charges can exist by themselves as a single positive or a single negative charge. Electric charges create electric fields. This is similar to a magnetic field, but different in ways that we will explore. Electric charges can attract and repel, just like magnets do. You’ve seen this when perhaps an article of clothing or a piece of plastic gets charged with what we call static electricity, causing things to cling together. The fundamental unit of charge is called the electron. When electrons flow through a material called a conductor (like a copper wire) we call this current. The pressure on the flowing electrons is called potential. Since it is measured in volts, it is also referred to as voltage. Devices used to control the current flow are called switches. There are many devices that control the flow of current, amplify the current, reduce the current, and do work with it. We can use electric current to turn motors, make light, make sound, and make heat.

So there you have it. We’ve come to the end of our overview video. I’ll cover each topic in depth in a future video. I hope you enjoyed it and I hope you come back and watch more. Leave a comment below if you have a suggestion for a future topic. Thanks for watching.