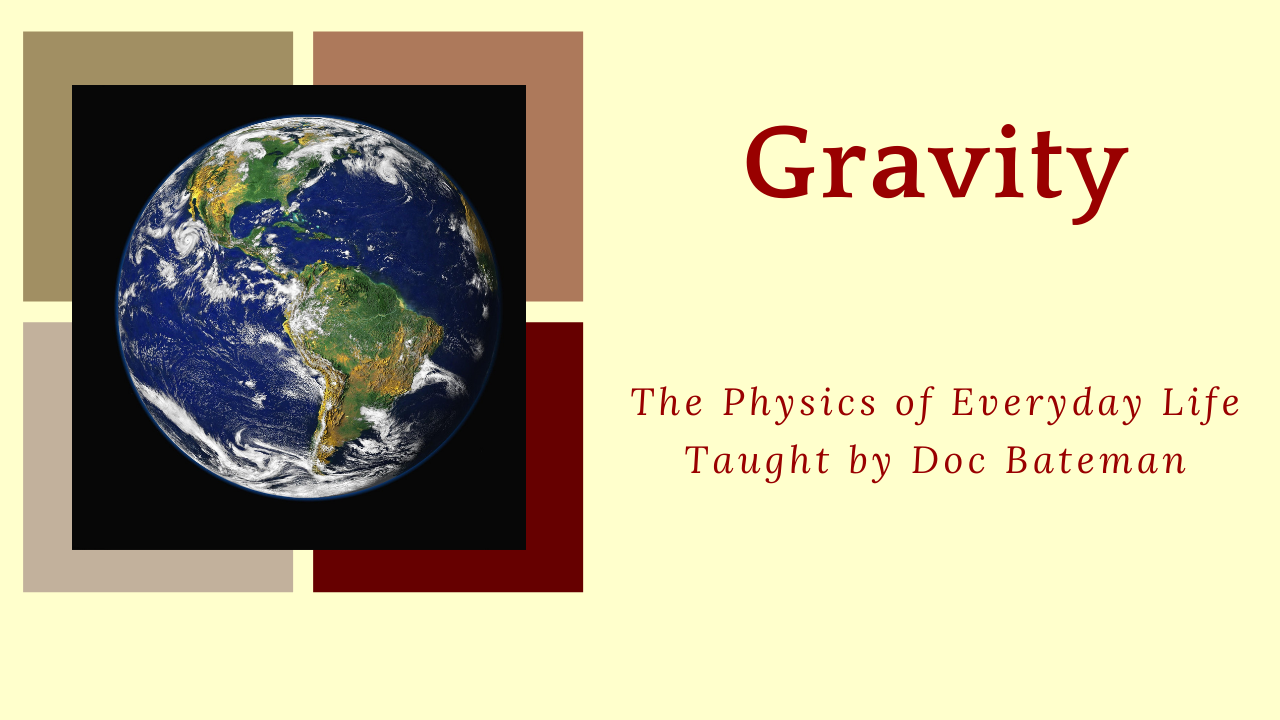 Here is the next video to the Physics of Everyday Life series. In this video we discuss how a Physicist looks at gravity, how it works, and what happens in freefall. Be sure to get your free worksheet from my website.

Hi there, Doc Bateman here. You probably haven’t ever thought much about gravity. It seems so ubiquitous. It’s all around us, it’s always there, and it’s easy to ignore. In this video I explain what affects the amount of gravitational force, is there gravity in space, and just what happens during free fall. If you get value from my videos, please like and subscribe below. Then you’ll get a notification when I publish new videos. And, please share them with a friend. Questions? Leave them for me in the comments below. Now let’s get started.

Gravity is a pulling force that is felt between two masses typically between you and the Earth in round numbers the acceleration of gravity or g is 10 m/s per second. That means for an object that is being accelerated by gravity that is in freefall, for every second of acceleration its velocity will increase by 10 m/s every second. So after 1 second it’s going 10 m/s, after 2 seconds 20 m/s, after 10 seconds 100 m/s. For those viewing the US, that’s 223 mph or in Europe and the rest of the world, it’s 360 kph. The fastest sports cars can accelerate at about the same rate, but only for short periods. Gravity accelerates at this amazingly high value all the time!

What makes gravity bigger or smaller? To answer this question we need to look at the equation. But don’t panic! I’ll teach you how to analyze a formula and I promise I’m not going to ask you to solve any problems. Here we see that the force of gravity contains four terms the first is the universal gravitation constant or capital G, which is just there to make the units work out right next is the two masses. Remember we said that gravity is a pull between two masses? Well here they are. Now let’s talk about proportionality. Notice that the masses are in the numerator? That means that if either mass gets bigger then the force gets bigger. This is what we call directly proportional. Next, notice that the distance, we’ll call it r is in the denominator. So if r gets bigger, the force gets smaller. This is called inversely proportional. But there’s even more to it than that. Notice that r is squared? This means that if r doubles, then the force decreases by a factor of 4. This is called an inverse square law.

Say you were standing on a bathroom scale. The floor pushes up on the scale and the scale pushes up on you. The scale measures your weight by how hard you push down on the top of the scale, with the floor pushing up by the same amount. What if the scale happened to be inside an elevator and the elevator was accelerating upwards? Then the floor of the elevator would be pushing up more than expected on the feet of the scale, and the reading of your weight would increase. Conversely, if you were standing on this scale and the elevator accelerated downwards, then the amount you’re pushing on the top of the scale does not change, but the amount that the floor is pushing up on the feet of the scale decreases. It’s less than expected, so the reading of weight on the scale decreases. If our acceleration downward was exactly the same value as gravity, then it would offset gravity and we would be weightless. Another way to think of this is the floor is accelerating away from us the same amount that gravity is pulling on us, so there is no force on us from the floor. This means that we sense no weight. Gravity is still working, but we have offset its acceleration by the downward acceleration of the floor.

We can simulate periods of weightlessness in an aircraft that flies in a parabolic arc. The astronauts affectionately call this aircraft the “vomit comet.” In this particular arc, the passengers can experience weightlessness for about 30 seconds at a time. It’s a good way to train and test astronauts and probably get sick. Except for the orbiting case, gravity is felt in outer space and it decreases as one over r squared. Gravity is what holds the moon in orbit around the Earth, it’s what holds the Earth in orbit around the sun, and all of our other planets as well.

The moon has its own gravity, which is why the astronauts were able to walk on it and were not weightless on the moon. But recalling the formula for gravity, the moon’s mass is only about 1/6 as big as the Earth, so its gravity is only 1/6 of the Earth’s gravity. So if you weigh 180 lbs on the Earth, you would weigh only 30 lbs on the moon. Did you know that the moon’s gravity pulls on the Earth as well? Tides in the ocean are the daily rise and fall of sea level caused by the gravitational pull of the moon, of the sun, and the Earth’s rotation. High tide occurs when the moon is directly overhead or exactly on the opposite side of the Earth from you. If you draw a line from the moon to the Earth, high tides occur along that line on both sides of the Earth. There are also smaller tides where the sun is directly overhead or directly on the opposite side from you. Again, this is caused by gravity pulling on the Earth from nearby very large masses.

So there you have it. I hope you learned a little bit more about gravity how and where it works and it all makes a little more sense to you. Thanks for watching.

The Physics of Everyday Life: Intro