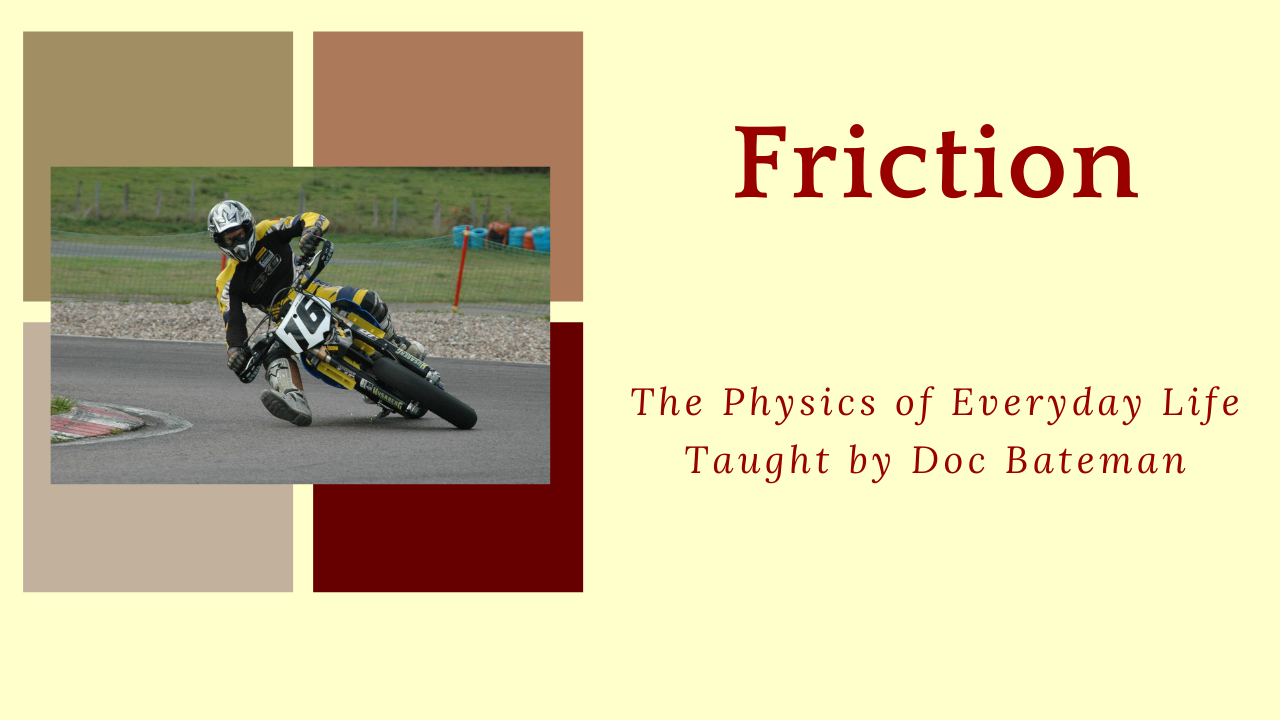 Here is the next video to the Physics of Everyday Life series. In this video we discuss how a Physicist looks at friction, how it works, and how it can help us. Be sure to get your free worksheet!

Hi there, Doc Bateman here. What do you know about friction? It’s rough stuff, right? I’m going to tell you how physicist thinks about friction, where it can be helpful, or maybe not so helpful, and how you can work to beat it. If you get value from my videos, please like and subscribe below. Then you’ll get a notification when I publish new videos. And if you have a friend that might get value from these videos, please share it with them. Questions? Leave them for me in the comments below. Let’s get started.

Friction is a force that always opposes motion. Is that good or bad? Well, it depends on your point of view. We’ll see here that friction has a “good guy, bad guy” reputation. Sometimes it helps and sometimes it hinders. There are two kinds of friction: static and kinetic. Static friction is what you have to overcome to get something to move; kinetic friction is what you have to continually overcome to keep it moving. Say you wanted to try and slide a very large box. As you push on it, the force of static friction pushes back against you. In order to get the box to slide, you must push harder than the force of static friction. Once you have done this, as the box is sliding, what is pushing back against you now is the force of kinetic friction. In order to keep the box moving, you must overcome this smaller force.

The force of static friction is always greater than the force of kinetic friction. What that means is: it’s harder to get something moving than it is to keep it moving, and the smoother the surface, the closer together the numbers are for static and kinetic friction forces. All of this “pushing against friction” description sounds like friction is something that always works against us. But did you know that friction often works in your favor? Have you ever slipped on a wet floor? That’s a case where friction is your friend. When you are driving down the street or riding a bicycle and you need to turn a corner, the friction of your tires on the road prevent you from sliding off the road. This is a good thing. You need for the force of friction to be greater than the sideways pushing force of your turning vehicle. Here the wheels have to overcome the force of kinetic friction in the forward direction and they should not overcome the force of static friction in the sideways direction. If it does, the vehicle goes for a slide.

And what about when it’s time to slow down? Brakes work completely on friction – they convert the kinetic energy of your vehicle into heat or thermal energy, which causes the vehicle to slow down. Bicycle brakes simply pinch rubber pads onto the wheel. Bicycles don’t have much kinetic energy, so their brakes don’t generate much heat. Cars however do generate a lot of heat when braking. That’s why automobile brake pads are made from a material that can withstand high temperatures. Long ago, they were made from asbestos; now they are made from a mix of soft metal particles like brass and copper and ceramics.

Friction works by converting mechanical energy into heat or thermal energy. If we’re sanding something by hand we don’t notice the heat because it’s a very tiny increase. But if we keep sanding, eventually we would notice a temperature increase. Here the abrasive is removing small bits of material to smooth out the surface, which decreases the force of friction.

When the blade of an ice skate pushes down on ice, the enormous pressure on a very small surface causes the ice to slightly melt, which reduces the friction greatly. This allows the skater to slide almost frictionless.

Trains are a very energy efficient method of transportation. Since a train wheel on a train track has very little friction and the train crews who laid the track worked very hard to make the tracks as flat as possible. Because of these things, once the train is rolling, it takes very little energy to keep it rolling, and therefore they burn very little fuel once they’re moving.

So there you have it. I hope you know a bit more about friction, what it can do for you, and that it all makes a little bit more sense. Thanks for watching.

The Physics of Everyday Life: Intro